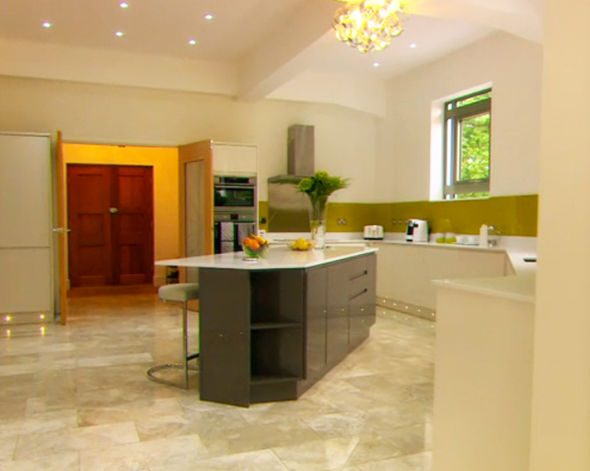 The show’s resident architect George Clarke, who has made a name for himself converting dilapidated non-residential structures into beautiful homes, was full of praise for the final result and in particular how they kept much of the building’s character during the update.

Downstairs, George marvelled at how the “dark, damp concrete tube” had been transformed into a light filled kitchen and living room, flooded with light from an extension.

To make a success of the project the owner couple needed to make good use of quite a difficult room layout. They also needed to keep the original flavour of the house intact while updating it and adding a splash of glamour to match their lifestyles.

The kitchen did this well according to architect George. He said: “I love the layout of the kitchen, it respects the tower’s octagon shape and opens up a dialogue between the new stuff you have put in and the existing stuff.”

The countertop was shaped to match the room’s unusual layout and features. It was completed with a jaunty angled kitchen island placed diagonally across the room to maximise space in a tricky environment.

The absolute white counter matched the couple’s desire for a pristine and crisp interior design.

The couple said that they liked the art deco exterior to the property, but on the inside they wanted to marry the art deco feel with a glamorous “footballers’ wives” feel.

From top to bottom the house was finished with white fittings, pristine lines and bold glass balustrades.

We think the finished product is beautiful with amazing views over a special part of Cheshire.

The tower on Warrington Road was bought at auction for £280,000 in 2013 with plans to turn it into a four-bedroom home with a conservatory and garage.

The tower was built to improve water pressure in and around High Legh. It grew redundant when United Utilities built a new pumping station at Bucklow Hill.