As we all know (especially if we have families) the kitchen is really the control room of the home. It’s where the cooking gets done. It’s often where the eating gets done. Add to that the socialising and it’s perhaps the most important space in the house.

And it’s increasingly one where technological innovations are playing their part, with many developments transferring from the States. So here are five ideas for how to turn your kitchen into a “smart” kitchen.

Let’s start with the taps. The humble kitchen tap. Or maybe not so humble. Recent new products have included a tap (this one from Italy) which can provide cold, hot and almost boiling water…. all from a single tap. Meanwhile Stateside another new tap system has replaced the usual “tube like” spray of water with a strong sweeping blade of water. It seems such an intense pattern is much better for doing the washing up. And anything that helps with that chore must be seen to be a good thing.

It’s hard to imagine something that might have been cut from the very ground to be an innovation, but even within kitchen countertops and surfaces, great strides have been made. Granite is natural, beautiful and the perfect addition to any kitchen. However as a natural material, it might require sealing. An innovation with quartz is that, although not a natural finish, it won’t require further treatment. And although not natural, per se, contemporary styles have been very successful in replicating natural stone.

We are increasingly seeing ovens developing something approaching intelligence! For a few years now we have been used to built-in ovens that fit snuggly, and are perhaps even concealed, into kitchen units and islands. However convection ovens are now more widespread. Firstly, these ovens can cook more quickly than a normal oven, perhaps twice as fast, important for our hectic lives. They can also be set to cook dishes on their own…. and if that isn’t enough, some now come with WiFi, so that you can operate the oven from other parts of the house… perhaps remote cooking Christmas dinner from the comfort of the living room, with The Queen on the telly! 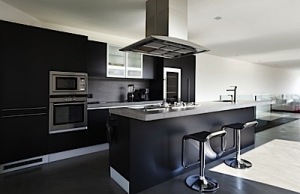 The kitchen island made a comparatively recent return to kitchen design, but has also enjoyed its own renaissance of innovations. Beyond the actual physical look of the island, some kitchens now use this space to benefit from a second hob. Perhaps using induction technology (which has a smooth top so is easier to keep clean), these create a second cooking space, perfect for bigger families or larger dinner parties.

If your kitchen is anything like ours, then alongside the pots and pans you’ll find pods and pads: docking stations for music, and an iPad set up looking through Jamie Oliver recipes. Kitchen designers have taken this on board, incorporating more resources for technology within the kitchen. These might range from a charging point built into the island, or a music dock embedded into the design.

So, technology is now being incorporated into kitchen design, along with the stylistic touches. Remote controlled ovens… embedded sound systems… all we need now are the robots to actually do the cooking and the washing up. We await the Kraftwerk remix of “You’ll Always Find Me In The Kitchen At Parties”.